Our final saga of How the Congress Turns (our stomachs), we will finish looking at the technical changes added to the “Fixing America’s Surface Transportation Act” or the “FAST Act” (H.R. 22) will impact collectors. Back to Title LXXIII, Section 73001 we find:

Remembering that technical changes instructs the Office of the Law Revision Counsel how to correct the law, to understand this change we have to look at the law (31 U.S.C. § 5112(v)) to find that this is a correction to the law about minting palladium bullion coins.

The American Eagle Palladium Bullion Coin Act (Pub. L. 111-303) originally requested that the secretary study the feasibility of striking palladium coins and mint them if the study shows a market demand. Although the study showed that there is a market, it was not overwhelming. Based on the wording of the law, the U.S. Mint opted not to strike palladium coins.

The very first edit is to take away the wording that says to do the study and strike if there is a market to saying that palladium coins will be struck using as much palladium as can be found from United States sources. If there is a higher demand, the U.S. Mint can use sources outside of the U.S. to purchase palladium.

Finally, the last correction not only requires the U.S. Mint to strike palladium bullion coins but to also create collector versions. 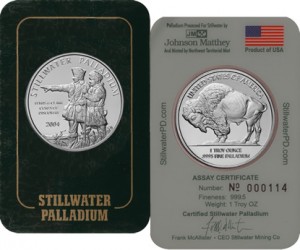 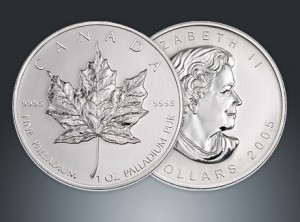 Palladium is a soft silvery metal like platinum. It is lighter than platinum (atomic number 46 versus 78) and similar to silver (atomic number 47). It has similar uses as silver including in electronics, compounded catalysts, jewelry, and coins. Palladium commands a higher price than silver because it is less available but less expensive than platinum, which is more difficult to mine.

The primary source of palladium in the United States is the Stillwater Mine in Montana. The mines, which also provides the U.S. supply of platinum group metals (PGM), is owned and operated by the Stillwater Mining Company. The American Eagle Palladium Bullion Coin Act was introduced by Rep. Dennis “Denny” Rehberg (R), Montana’s only member in the House of Representatives.

The final entry will discuss how the transportation bill and bad timing will affect American Silver Eagle collectors.