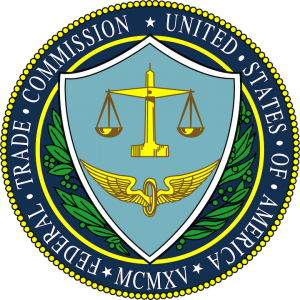 The Federal Trade Commission (FTC) published the “Final Rule of its Rules and Guidelines” for enforcing the Hobby Protection Act (16 CFR Part 304) to include the provisions of the Collectible Coin Protection Act (Pub. L. 113-288) that was signed into law by President Obama on December 19, 2014.

It is the job of the FTC to provide support to enforce the Hobby Protection Act. When updates are made to the law, such as the Collectible Coin Protection Act, the FTC is required to figure out how they will implement the law. Executive agencies, like the FTC, is required to write regulations that conform with the law and legal precedent, announce them to the public, allow for public comment, and then publish the file rule.

On October 14, 2016, the final rules that the FTC will use to enforce the Hobby Protection Act was published in the Federal Register (81 FR 70935). Since this is the final rule, the section begins with explanations and commentary about the information received from the public comments.

What appears to be troubling is that the FTC rejected comments from noted numismatists that there should be a rule to cover the manufacturing of fantasy coins. Fantasy coins are those that were not manufactured by the U.S. Mint. An example cited was the manufacturing of a 1964-D Peace Dollar “FANTASY” since the coins were never officially manufactured. Although the coins were struck, they were considered trial strikes and subsequently destroyed.

Daniel Carr is a mechanical engineer who also studied computer graphics and later turned it into an art career. He had entered U.S. Mint sponsored competitions for coin designs that have been used on commemorative coins. Carr is the designer of the New York and Rhode Island state quarters and his design was used as the basis of the Maine state quarter. 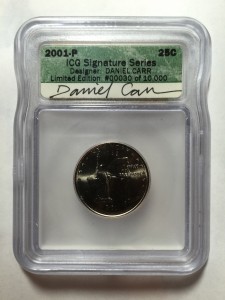 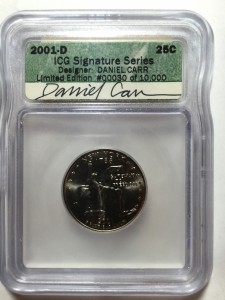 Carr had bought surplus coining machines from the Denver Mint, repaired them, and had been using them to strike fantasy coins. One of his fantasy coins was the 1964-D Peace Dollar. Over 300,000 coins were struck in 1965 at the Denver Mint anticipating its circulation only to be destroyed after congress disapproved of the way the Mint was allegedly handing the program. Some believe that some coins have survived, much like the 1933 Saint-Gaudens Double Eagle. But like that famed double eagle, it would spark a legal battle if a coin would surface.

Capitalizing on the story, Carr struck his own versions with varieties, errors, and finishes. He sold them as fantasy coins but were not marked in any way. Advertising and writings from Carr explicitly call them fantasy coins, but what about future sellers?

FTC claims it is not necessary to amend the rules “because it can address specific items as the need arises” The FTC further states they have “addressed whether coins resembling government-issued coins with date variations are subject to the Rules.” Using past precedent, the FTC concludes “such coins should be marked as a ‘COPY’ because otherwise they could be mistaken for an original numismatic item.”

Many numismatic industry experts who have seen how Chinese counterfeits have damaged the hobby, wanted the FTC the rule codified so that it would force someone like Daniel Carr to mark his fantasy pieces appropriately. Carr continues to manufacture fantasy pieces based on designs of actual coins changing the date. Recently, Carr has produced Clark Gruber fantasy products with modern dates without the word “COPY” imprinted on the coin.

While Clark Gruber gold pieces were never legal tender, there were allegedly pattern pieces of Presidential dollars that included the required inscriptions and included a denomination. There was no indication on the coins that they were not legal tender even though Carr marketed them as medallions.

The purpose of the CCPA was to prevent counterfeit coins from misleading the public. Carr has allegedly jumped over that line joining the Chinese counterfeiters in an effort that will mislead the public with the apparent blessing of the FTC.

Sources I contacted were not encouraged by the FTC action. It was noted that when Carr’s 1964-D Peace fantasy dollars were reported, the FTC did not take action.

NOTE: Normally, I will include links and other details to the items I write about so you can read more. However, because it is my opinion that what Carr has done violates every spirit that the Hobby Protection Act stands for, I will not provide links to dignify his efforts. I wholeheartedly believe that if similar coins were brought into the United States from abroad, especially from China, the FTC would act to protect our rights under the Hobby Protection Act. However, since Carr previously provided art to the U.S. Mint, it is likely the government may be trying to spare its own embarrassment.