One of my favorite quotes is from philosopher, essayist, poet, and novelist George Santayana who wrote, “Those who cannot remember the past are condemned to repeat it.” I was reminded about this quote while reading the news and stumbling over a story “Stamp Out the Sexist Legacy of the Dollar Coin” by Addison Nugent. 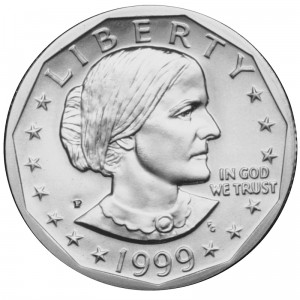 The Susan B. Anthony dollar coin was introduced in 1979 with much fanfare for being the first coin to honor a woman. The coin was a failure because it was confused with a quarter

Ms. Nugent, who revealed that she is distantly related to suffragette Susan B. Anthony, laments the lack of women on United States coins and currency. She rightly points out that Susan B. Anthony was “the first nonfictional woman to grace the face of the dollar coin” only to complain later that the coin was removed later.

Nugent complains that the design of the coins and the fact that they use the visage of a female as the reason these dollar coins have not been successful. What Nugent failed to do is learn from history and the facts.

The failure of the Susan B. Anthony dollar was not because the coin depicted a woman or was called the “Agony Dollars” (I had never heard this term before reading the article). The coin failed because of the decision to make it too close to the size to the Washington quarter, had reeded edges like the Washington quarter, and on a simple glance was consistently confused with the Washington quarter. The confusion made the coin very unpopular in the United States but continues to find usage in other countries whose currency is based on the U.S. dollar. 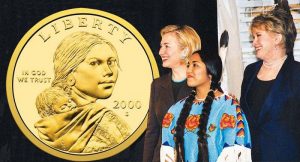 When it came time for Congress to recognize the failure of the Susan B. Anthony Dollar, Congress approved a new design and went out of their way to select another historic woman to feature on the coin. After several suggestions, Sacagawea, the Shoshone guide of the Lewis and Clark expedition, was eventually chosen to appear on a coin that was to be golden in color and a smooth edge. When the designs were reviewed, Treasury picked Glenna Goodacre’s design with the profile of Sacagawea in three-quarter view and her infant son, Jean Baptiste Charbonneau, carried on her back. It is considered one of the best circulating coin designs of the modern era.

Nugent then wrongly notes that “Sacagawea coins were pulled from circulation from 2002-2008 and from 2012 onward.” I do not know where she gets her facts from, but the reality is that the U.S. Mint, Department of the Treasury, and Federal Reserve does not recall paper currency or coins from circulation. What happens is that when there is no demand for a coin the Federal Reserve stops ordering them from the U.S. Mint.

The reason that the dollar coin does not circulate is not that it depicts a woman. The dollar coin does not circulate because the public has chosen paper over a coin. Even though studies have shown that the public can adopt and that there would be a savings to the government if the paper dollar was no longer printed (see the Government Accountability report GAO-13-164T), Congress does not have the intestinal fortitude to eliminate the paper dollar.

Another fact that Nugent does not acknowledge is that even though the U.S. Mint does not produce these coins for circulation they are produced for the collector market. In addition to being included in mint and proof sets, there have been special sets created with Native American coin honoring their accomplishments. Aside from being able to purchase these coins at face value in any U.S. Mint and Bureau of Engraving and Printing facility open to the public, you can also go to any bank and request they obtain a roll for you from the Federal Reserve.

Nugent’s complaints also do not consider the appearance of women and minorities on commemorative coins or that the first woman to appear on circulating currency was Martha Washington. Our first First Lady’s portrait appeared on the $1 Silver Certificate between 1891 and 1896.

Although I agree with Nugent that United States coins and currency should be more diverse and I am in favor of removing Andrew Jackson, who was responsible for the Trail of Tears, from the $20 note, it is difficult to side with any argument whose purpose is based on factual errors.

Popular online magazine Atlas Obscura recently became the latest to probe the question of how an 11th century Viking penny came to rest on the coast of Maine. In the decades since the 1957 discovery by amateur archaeologists, it’s been denounced as a hoax, validated by scholars, denounced as a hoax again and — as recently as this past November — validated by scholars again.

A similar coin sold for more than £4,000 in a 2011 auction, but Jason has gone down the correct route of declaring it as treasure

Stamp Out the Sexist Legacy of the Dollar Coin

The U.S. dollar coin has been the only American currency to regularly feature women. With these leading ladies now ousted, it's time to toss the coin.

Sort out your Manx £1 coins from your UK ones!

The United Kingdom’s round pound coin will no longer be accepted as a form of payment for services and retail purchases in shops after February 28.

When Eric Lawes set off for a field in Hoxne village, Suffolk on November 16, 1992, it wasn’t on a treasure hunt. The metal detector he’d received as a retirement gift was meant to find a hammer lost on the farmland.

JAMES Grear started selling coins with his best mate Henry when they were just 18. The pair were fed up with working as labourers on a building site in Bristol earning up to £9 per hour and decided…

State Police are working to find the owners of a large bicentennial medallion coin. It was recovered months ago, but no one has stepped up to claim it.

Colonial Williamsburg has acquired a rare and iconic Danish abolitionist medal that commemorates a royal edict to end the slave trade. The bronze medal was struck in 1792 and is one of only a handful known to exist, according to a Colonial Williamsburg Foundation press release.

By Baek Byung-yeul Organizers for the 2018 PyeongChang Olympics unveiled a new limited coin set for the Winter Games, Wednesday. At the building of Poongsan Corporation in Seoul, the maker of the PyeongChang Olympics commemorative bill, the organizing committee made public the new package.

Grip the handle and turn the crank. Watch the roller turn. Wait for that clink, reach into the little door.