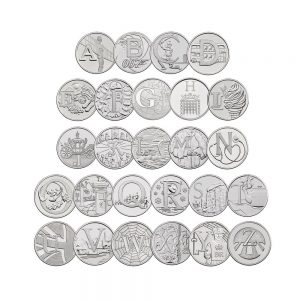 While searching the interwebs for numismatic-related stories there are pointers that lead to the British tabloids. Most of the stories are about the hundreds or thousands of pounds paid for a former circulating coin on eBay. Sometimes, their pages lead to different stories on their site that are very entertaining. Those who have read the New York Post would understand the format.

This is not to say these publications are wrong, but they are prone to hyperbole and exaggeration. Take for example the story “Two million RARE 10p coins enter circulation – get one here” that was posted to the Daily Star’s website this past week.

The title refers to the release of Royal Mint’s “The Great British Coin Hunt of 2019.” Using the same designs as last year, the Royal Mint will place into circulation 10 pence coins with 26 designs representing the letters of the alphabet.

The Great British Coin Hunt started last October with the weekly release of several coins at a time until 2.4 million were placed into circulation. As part of the program, collectors can purchase a special folder from the Royal Mint (£9.90 or about $13.10) or other items to help people collect the coins. The Royal Mint also sells uncirculated 10p coins for £2 each.

If you think that the U.S. Mint overcharges for their products, 10p is worth about 13-cents at the current exchange rate and £2 is about $2.65. Does packaging and other expenses cost $2.52 per coin?

But to call 2.4 million coins rare may a bit of an exaggeration.

If each coin has the same circulation, that means there will be about 92,000 coins per letter. Since the United Kingdom’s population is around 66 million people, that means only one-tenth of one percent of the people can collect these coins.

Maybe the tabloids are not wrong calling 2 million coins “rare!”

A Story Of Honor: The Curious History Of Military Challenge Coins

Originally posted on http://www.1007sandiego.com/story/40029522/a-story-of-honor-the-curious-history-of-military-challenge-coins &nbsp; If you&#8217;re a member of the United States military,…

FRESHLY minted collectable 10p coins are being released this month — and they have a “quintessentially British” theme including tea and fish and chips.

Royal Mint launch new 10p coins for 2019 – where can you get one? Stock WILL be limited

THE ROYAL MINT have announced that they are set to release 26 new designs of 10 pence coins, for its 2019 Great British Coin Hunt collection.

If you lost a coin in Montreal’s west end, there’s a good chance it was picked up by Young S. New. But he didn’t slip that coin in his pocket with the intent of spending it on himself — he picked it up so he could give it away.

Rambler stumbles on gold coins worth £3,000 in boxes hidden under tree

The nine British bullion coins were discovered by chance after being hidden near Allington Castle in Kent. Detectives have launched an appeal to return the hoard to its rightful owner.