I can’t even give it away 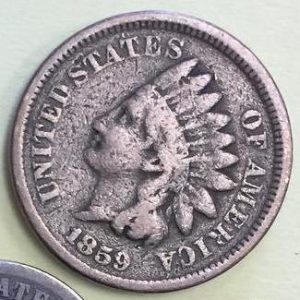 After the fiasco earlier this week when I tried to give away an 1859 Indian Head cent, someone else just rejected the coin.

It was a busy day, and there were a large number of cash transactions. Since I was not paying attention to the coins I was pulling out of the drawer, I scooped 2-cents to give to someone in change. As I dropped the coins into his hand, I noticed that one was the 1859 Indian Head Cent.

Rather than putting the coins in his pocket, he dropped the two coins into a tray I keep by the cash register.

Since this happened earlier in the afternoon, I left the coin there to see if anyone would notice. Following several more cash transactions, I took the coin out of the tray and dropped it back into the drawer.

It might not be the prettiest Indian Head cent I have seen, but it is still worth about $15-20. And I cannot give it away!

If I cannot give it away on Saturday, it is coming home with me. At least I appreciate its significance in numismatic history.