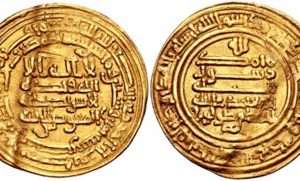 Abbasid coins of the late ninth century
(via Egypt Today)

A lesson in unintended consequences was filed in an Egyptian court this week. As part of policy disagreements between Egypt and Turkey, the case asks the courts to demand the return of 23 million gold coins taken by the Ottoman Empire.

The Ottoman Empire was the last of the significant conquering empires of Europe. By the late 19th century, modernization and uprisings forced the Empire to consolidate around the area of modern-day Turkey and the Middle East. Even though the Empire was declining, that did not stop the government from trying to exert influence.

After Great Britain left Egypt in 1914, the Ottomans stepped in and demanded Egypt pay tribute in the form of gold coin to the Empire. After the fall of the Empire and the formation of modern-day Turkey, they continued to demand tribute. Egypt stopped paying the tribute on the establishment of the Republic in 1953.

The lawsuit claims that the Ottomans and Turkey illegally removed the coins from Egypt and demands their return.

In one report, the brief cites the provisions of the UNESCO convention as authority for demanding their return by declaring the coins as cultural property.

If allowed through their courts and if the suit is successful, it becomes precedent for Egypt to claim any item as cultural property and demand their return. Aside from coins, exhibits at museums around the world would have to prepare for similar requests. In the United States, the Brooklyn Museum has one of the most extensive Egyptology collection in North America. Their holding is second to the British Museum, who will also face the same questions.

Ancient Egypt did not have a monetary system as we know it today. Since they did not have silver mines and gold was scarce, they traded goods and services. Taxes were paid by people providing products or working for the government.

There are known bronze coins from early periods, but several references noted that they were used for a limited amount of trade.

The first known coins of Egypt came during the Ptolemaic Empire of ancient Greece. By that time, the Egyptian Empire moved up the Nile River from the area near modern Cairo to modern-day Alexandria. As a weakened Empire, Ptolemy I was able to conquer these areas of the Middle East following the death of Alexander the Great.

It was a time of great fortune that included education, the arts, and modernization of the old Egyptian Empire. Silver and gold were brought as the economy soared. Ptolemaic coins are considered Greek coins for many collectors of ancient coinage.

Those who enjoy collection ancient coins should carefully watch this case as it winds through the Egyptian courts. The wrong outcome will affect collectors and be another attack on the hobby.

…My Proustian moment came when I read Maurer’s comment: “People working on new technologies of money tend to assume that money is just money…

It looked, on first examination, like an antique charm bracelet loaded with gold trinkets: a tiny Eiffel Tower and a little bowling pin and iconic images of provincial Italy. The owner thought the family heirloom might fetch $8,000 on the open market.

While first responders in Windsor-Essex save other peoples' lives every day, they're now equipped with a new 'All In Coin' taking aim at their own mental health. Essex-Windsor EMS and Essex Fire are giving out coins to their workers to make it easier for them to talk when needing mental help.

CAIRO – 18 January 2020: Egypt’s Administrative Court has set February 15, 2020 to consider a lawsuit demanding Turkey to repay Egypt more than 23.1 million gold coins that were taken from Egypt in tribute by Ottoman Empire “illegally.”

→ Read more at egypttoday.com
Royal Mint launches huge sale with up to 20% off coins and gold bars

If you’re keen to own a piece of British history, The Royal Mint January sale may have just what you’re looking for.