Congratulation to the Andy Reid and the Kansas City Chiefs for winning Super Bowl LIV! 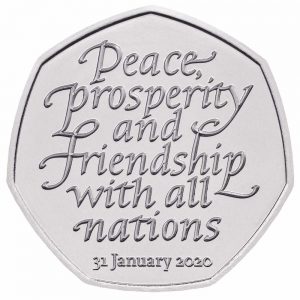 The grammar police are snobs.

The grammar police are those people who expect everyone to read and write in proper form. They want everything from signs to notices to be grammatically correct. There is no compromise because compromise leads to illiteracy.

These are the claims by novelist Philip Pullman who as called for a boycott of the Brexit 50p coin because it leaves out the Oxford comma.

For those who are not grammar snobs, the Oxford comma is also known as the serial comma. It is the comma placed after the second-to-last (penultimate) item of a list before the conjunction. Its use first appeared in 1894 in Hart’s Rules for Compositors and Readers at the University Press, Oxford. Hart’s Rules has been the defacto standard for English usage since its publication.

The 'Brexit' 50p coin is missing an Oxford comma, and should be boycotted by all literate people.

Oxford University Press has updated the rules over the years with the last version published in 2002. Now called The Oxford Style Manual, it does not waiver in its proper use of the Queen’s English. Thus, people like Pullman cling onto it to create an air of superiority.

When there were rumors that the use of the Oxford comma was going to be eliminated from the style guide, reportedly one such snob said, “Are you people insane? The Oxford comma is what separates us from the animals.” The rumors were not true.

Sometimes, the lack of a serial comma can cause problems. In 2014, someone sued a Maine company because the absence of a comma caused an alleged misinterpretation of workplace policies.

But this argument is over a coin.

What is worse is that the phrase used on the coin is being picked apart by grammar snobs everywhere. The phrase on the reverse of the coin, “Peace, prosperity and friendship with all nations,” was adapted from Thomas Jefferson’s First Inaugural Address. As Jefferson was outlining the principles of his administration, Jefferson included, “peace, commerce, and honest friendship with all nations, entangling alliances with none.” With its ties to Jefferson, some suggest its usage will (GASP!) Americanize the Queen’s English!

‘The lack of a comma after “prosperity” is killing me,’ says Stig Abell … the Brexit 50p. Photograph: HM Treasury/PA

→ Read more at theguardian.com
Trial Underway for Museum Heist of one of the World's Largest Gold Coins

A cache of 232 ancient coins was recovered from the house of a known antiquities thief in Kfar Kana last week by the Israel Antiquities Authority’s Theft Prevention Unit. The trove of coins includes samples from the 5th century BCE Persian period, to the later Hellenistic, Roman and Byzantine periods, and to the early Ottoman period in the circa 16th century.

PA Media The coins had to be re-produced after Brexit was delayed A commemorative 50p coin marking the UK's departure from the EU has been unveiled by Chancellor Sajid Javid.

→ Read more at bbc.com
The Brexit Coin Is Further Proof of a Coming Dystopia

→ Read more at jezebel.com
1,300-year-old coin with face of obscure Saxon king may sell for £15k

A rare 1,300-year-old coin featuring the face of an obscure Saxon king could sell for £15,000 at auction after its owner spent three years trying to prove its authenticity. Experts and scholars dismissed the silver penny Andy Hall unearthed in a muddy field in Wiltshire, as it featured the head of a virtually-unknown Saxon king.

Jersey Heritage Some of the coins are on display at La Hougue Bie Museum in Jersey Two men who found a huge hoard of pre-Christian coins in a field in Jersey have been recognised as record-setters.

The French treasury is considering European plans to phase out one and two-cent coins in the coming years.

The former Carson CIty Mint, home to the Nevada State Museum since 1941, will be celebrated for 150 years on Tuesday, Feb. 4.