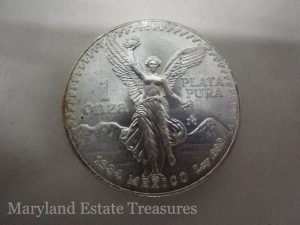 We sold this 1984 Mexico Libertad at auction for a nice premium above spot!

The most interesting news for this week did not come from online sources but an email newsletter for resellers. According to the readers of the newsletter, the best selling items are coins and currency.

According to their survey, most of their readers report that collector coins are outselling all other categories and bringing in the best premiums. The best-sellers are modern bullion coins and Morgan dollars.

Modern bullion coins are not limited to American Eagles. Auction bidders are driving up the prices of Maple Leafs, Britannias, and Libertads. Collector bullion coins, like the American Eagle proofs and Pandas, have realized premiums beyond typical liquidation auctions.

Other categories that are experiencing a spike in sales are mixed lots. Mixed lots of silver U.S. coins are doing the best followed by lots with foreign coins. One dealer sold a lot of 20 holed English pennies for $2.50 per coin. These were coins from the reign of George V and early into Elizabeth II.

Since the readers of the newsletter I receive are dealers in the second-hand and liquidation markets, this is excellent news. The bad news is that it is becoming challenging to find inventory to resell.

Rare Roman coin discovered in Colchester by schoolboy 40 years ago sells for £4,000

A RARE Roman coin discovered in Colchester more than 40 years ago has sold for £4,000 after going under the hammer. Kevin Scillitoe found the coin, minted by the Emperor Carausius, when he was ten-years-old.

Arizona history is rife with tales of hidden mines and buried treasure. Even today, those hoping to strike it rich head out with maps and shovels, despite tremendous odds against them. Scott Craven/The Republic

→ Read more at lcsun-news.com
Spare change? Cashless transactions could end the cultural legacy of the coin

As shoppers and retailers do away with cash transactions, we may be witnessing the end of a major source of social and historical information – the coin. In the modern age, coinage is increasingly seen as cumbersome, a vector for disease and costly to manufacture.

→ Read more at theconversation.com
Coin as a Means of Propaganda: Georgian and Western Experience

Multiculturalism (tolerance) and the ability to unify large different ethnic groups living within the state’s boundaries are those distinct features which serve as the fundamentum for economic, military and cultural achievements of the Western civilization.