The shutdown and U.S. money manufacturing 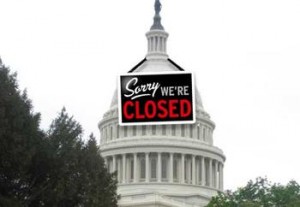 In the ongoing drama that is United States Federal government, a shutdown is looming over the shear idiocy of idiot-loges on both sides of the aisle attempting the rule and not govern. All 537 politicians elected to federal office are in need of a good spanking.

First, here are some impacts:

What does this mean for the money manufacturing bureaus of the country?

UPDATE (5:30pm): According to the Treasury Department:

Operations of the following bureaus are funded from sources other than annual Congressional appropriations, and would operate normally if a government shutdown were to occur: the Office of the Comptroller of the Currency (OCC), the United States Mint, and the Bureau of Engraving and Printing (BEP).

This post will be updated as new information is provided.

Representatives of these agencies may contact me via email to provide additional information. Please note that I do respect the confidentiality of sources!

NOTE: I am not a member of any political party. I am a proponent of government employees who do not deserve the way they are being treated by the elected officials.
Image courtesy of Adam Bitely at NetRightDaily.