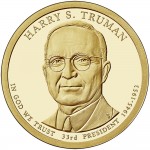 Some members of congress seem to act without thinking. Aside from not thinking about how much the U.S. Mint is forced to waste in order to make less than pure planchets, there are others who are so entrenched in their ideology that they make proposals that no longer make sense and will hurt the collecting industry in the long run.

Case-in-point, Sen. David Vitter (R-LA) introduced S. 95, a bill “[To] Terminate the $1 presidential coin program.” Like the knee jerking to copy and paste old bills, Vitter dusted off his previous attempt (S. 94 in the 113th Congress and S. 1385 in the 112th Congress) and dropped it in the hopper more in an attempt to make it look like he is doing something when all he is doing is annoying collectors.

By anyone’s measure, the Presidential $1 Coin program has not been a success. While it was fundamentally a great idea, the problem with having it gain wider circulation is that congress did not pass the appropriate laws to discontinue printing and distribution of the one dollar Federal Reserve note. When given a choice, people have chosen to carry the note rather than the coin.

In 2011, National Public Radio published a story complete with errors that caused a public outcry. But one aspect of the story was true: because the presidential dollar did not circulate, they were accumulating in the coin storage rooms at the Federal Reserve. When the story went vial, members of congress from both sides of the aisle seemed to fall all over themselves to appear like they were doing something and introduced go-nowhere bills to end the program.

Acting as the only adult in the room, then Secretary of the Treasury Tim Geithner, ordered that the production of all dollar coins, including the Native American dollar, be reduced to levels to only satisfy the collector market unless the Federal Reserve ordered more coins.

At this point, the Presidential Dollar, First Spouse gold coins, and the First Spouse medals are a collector’s series that is near its end. In 2016, the U.S. Mint is scheduled to issue coins in honor of Presidents Richard M. Nixon and Gerald R. Ford. By law, because President Jimmy Carter is still living, he is not allowed to appear on a coin. Even though President Ronald Reagan is deceased, the coins have to be in order making the program end with Ford.

With six coins to go in the series and four years after the fury, why is Vitter introducing this bill now? Costs have been contained with the reduction of circulation. In fact, reviewing the annual reports, the Presidential $1 program has increased in sales as more of the better known 20th Century presidents have been featured.

Rather than leave well enough alone, Vitter joins the others in congress of not thinking and dropping a bill into the hopper that he might think has value to a small percentage of a perceived base but fails to look at the bigger picture. This is part of their collective myopia that keeps congress’s approval ratings in the single digits.

As a federal government employee, Vitter, his staff, and the congressional support services are paid for out of your taxpayer dollars while the U.S. Mint is making more profit by maintain this program than it would otherwise. If members of congress would look beyond any ideology they pretend to profess and engage their brains when they do something like this, then maybe they might find their approval ratings at least higher than the current temperature in Washington, D.C.