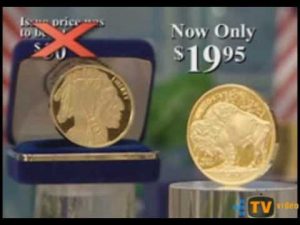 If there is one story from this week that makes my blood boil is from the Houston Chronicle. They reported that a 72-year old woman was duped by the National Collector’s Mint (NCM) into purchasing $1.3 million in alleged rare coins.

The elderly woman, like many other elderly who may not have the experience to deal with the sales pitch or understand the nuances of the particular investment, was smooth-talked by one of their salesmen who played on her emotions.

According to the story, the woman has infrequent contact with her children and used to look forward to the sales call from the NCM representative. Like similar scams, the representative likely fed on these emotions to convince her to buy NCM’s overpriced products.

The National Collector’s Mint settled on a fine of $750,000 from the Federal Trade Commission for advertising they were selling “official” 9/11 commemorative coins. The FTC claimed the ads were deception because no such coin was authorized by Congress, the only constitutionally legal entity to grant legal tender status to any coin from the United States. NCM settled without admitting guilt.

With all due respect to the National Collector’s Mint, they have advertised garbage collectibles before. Whether it is the not-so-official 9/11 commemorative coin or the tribute proof plated with gold with less than one-dollar in value, the television commercials that I have seen even on allegedly reputable cable channels is enough to make one gag on their coffee.

If you have elderly relatives living alone, give them a call. First, you will be doing a good thing especially if they are your parents. Even if there have been problems in the past, get over it. Life is way too short to hold a grudge. While talking with them, make sure they are not being taken advantage of by the likes of these scam artists. By talking with them they will not feel lonely and have to seek comfort in the voice of a smooth talker sitting in some cube farm in some sterile office.

Please remind them that if the deal sounds too good to be true, it is not a good deal! This includes the overpriced coins that are sold on the television shopping channels!

Is this the first fake new pound coin, or is it a misprint – you decide

Thursday is the last day that one-cent, ten-cent and 25-cent coins can be used as legal monetary tender in Jamaica.However, the Bank of Jamaica (BOJ) will continue to redeem them indefinitely, during its regular business hours of 9 a.m. to 2 p.m….

'Leprosy Coins' and the Legacy of Stigma

In many quarantines, these coins were the only form of money that patients affected by the disease could access.

South Africans can expect a new coin and banknote issue with former President Nelson Mandela’s face on it later this year.

An elderly Houston woman says an on-line coin seller based in New York took advantage of her loneliness to sell her $1.3 million in gold and silver coins at inflated prices. Patricia Thomas, 72, sued the National Collector's Mint in federal court in Houston, alleging that one of its sales representatives, under the guise of "checking in" with Thomas, smooth-talked her into to buying the coins, which cost more than twice what they were worth, according to court documents.

To ensure you the best experience, we use cookies on our website for technical, analytical and marketing purposes. By continuing to browse our site, you are agreeing to our use of cookies.

Blackpool Tower is set to feature on a new silver £5 coin, an announcement by the Queen has revealed. The commemorative cash, which will be released ahead of the iconic structure’s 125th birthday next year, will be part of a series to celebrate British landmarks.