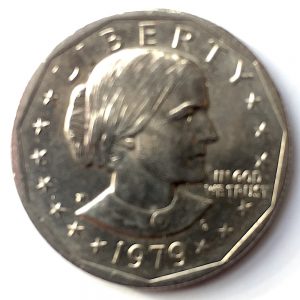 A 1979-D Susan B Anthony dollar found in change that was mistaken for a quarter.

In last Sunday’s Weekly World Numismatic News I commented on a story that members of the Philippines legislature were upset that the Bangko Sentral ng Pilipinas (Central Bank of the Philippines or BSP) issued coins that were similar look and feel but of different denominations. I related the story to the plight of the Susan B. Anthony dollar.

This week, I was involved in a real-life example of this confusion.

While getting ready to retire for the evening, I empty my pockets on my dresser and look to see if there is anything interesting. Since my only trip of the day was a local grocery store, I did not expect anything. As I looked at what I thought was 78-cents something did not look right. As it turned out, one of the quarters was not a quarter.

Mixed in with the change from my single transaction of the day was a 1979-D Susan B. Anthony dollar coin. Not only did the cashier make the mistake, but when I accepted the change I did not catch the difference.

A real-life example as to the reason why the Susie B. was not a successful coin!