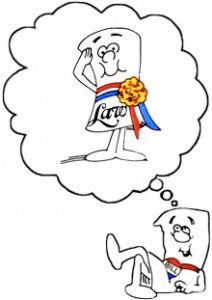 Congress is nothing if not full of shallow people who would pander to their own mothers if it meant winning a vote or two. Their shallowness is on display just before they go on an extended break when members drop bills into the virtual hopper for consideration.

In the old days, members of Congress would write have the bills printed on paper and dropped into a physical hopper. The Clerk of the House would empty the hopper and enter new bills into the Congressional Record and add it to the calendar. The bills are sent to the Government Printing Office (GPO) for publications. Nowadays, the hopper is virtual. The submittal process is all by the press of the button — however, the still prints the bills and the Congressional Record causing delays in reporting.

Members of Congress know this and can milk a story for days while they travel back to their districts for their summer break.

It is excellent public relations for these people whose approval rating is lower than drain cleaner. So in between the bills to rename Post Offices, federal buildings, and sections of highway are bills to create commemorative coins. Congress gets a nice writeup about these bills that they hope their constituents will remember knowing most people have short attention spans.

The numismatic media is no different than any other press sectors. Every numismatic-related bill that is introduced gets banner headline coverage even though very few will receive a hearing. The only difference in their reporting is that the numismatic media will bury the term “if it passes” somewhere in its reporting.

Then, when a bill passes one chamber and sent across to the other, someone is breaking out the champagne. Except someone forgot that we are talking about Congress where nothing is easy. Sure, the Women’s Suffrage Centennial Commemorative Coin Act (S. 1235) and the Christa McAuliffe Commemorative Coin Act of 2019 (S. 239) passed the Senate, but the House has not accepted these bills. Members of the House will not let these bills in the front door because they are revenue-generating bills, which constitutionally must be introduced in the House.

It was particularly interesting when a Tennessee newspaper lauded Sen. Marsha Blackburn (R-TN) for S. 1235 without noting that the bill introduced by this one-time member of the House is blocked for violating the constitution.

I find this stuff fascinating. Then again, I used to work for the federal government!

Still got old five pound notes, tenners or pound coins? Here’s what to do

We’ve had a whole host of new currency introduced recently, but what should you do if you still have old coins or notes knocking about? The answer depends on what kind of currency you have, and how long ago it went out of date – while you can still exchange the recently changed notes and coins, you may be out of luck if you find any half-pence or farthings.

A Vancouver Island man has spent the last 10 years uncovering thousands of items using his metal detector — many of which are historic and valuable, he says.

KANSAS CITY, Mo. — From Satchel Paige to Jackie Robinson and Buck O’ Neil, several of baseball’s iconic players began their professional careers with the Negro Leagues in Kansas City. Now those legends, along with countless others, could be honored with a special, commemorative coin.

The PIL filed by the National Association for the Blind (NAB) sought directions to the RBI to include distinctive features in coins and in currency notes, so visually-challenged persons can easily identify the same.