Counting Down the Top 10: #7 Dollars and What Sense

Two discussions that transcended numismatics is what to do about the one dollar coin and common one-cent coin. Both coins cause different problems depending on who is doing the arguing. I find it amazing that the logic that is used to support the argument is not used consistently.

Dollar coins have been around since the beginning of the republic. In fact, the coin that currently holds the record for being the most expensive coin sold at auction is a 1794 Flowing Hair dollar. The coin is reported to be amongst the first dollar coins minted at the newly created Mint was bought by Legend Numismatics for more than $10 million. Laura Sperber, one of the principals of Legend Numismatics, was quoted as saying that she was prepared to bid higher for the coin.

If that is not enough to show how important the dollar coin has been in our history, there is always the 1804 Bust dollar, also known as “The King of Coins.” The U.S. Mint ceased to strike dollar coins in 1804 because of hoarding when the price of silver rose. The dollars that were struck in 1804 were struck using dies dated 1803 and are indistinguishable from the coins struck in 1803. The U.S. Mint continued to strike “minor coinage” to encourage circulation.

In 1834, eight dollar coins were struck with the 1804 date to include in a special set created as a gift for the King of Siam (the area known today as Thailand). One coin was included in the set, one was retained by the U.S. Mint for its collection that is now part of the National Numismatic Collection at the Smithsonian National Museum of American History, and the six others were kept as souvenirs by Mint officials and eventually landed in private collections. Between 1858 and 1860 seven more specimens were surreptitiously by U.S. Mint employee Theodore Eckfelt. It is alleged that Eckfelt created 15 coins. Six are in private collection, one is now part of the National Numismatic Collection and the others were reported to be destroyed when seized by the government.

The Coinage Act of 1873, known as “The Crime of ’73,” ended the free coining of silver and put the United States strictly on the gold standard until the western states where silver was being mined became upset. Two weeks later, congress passed the Bland-Allison Act to required the Department of the Treasury to buy the excess silver and use it to strike the Morgan Dollar. Morgan dollars, especially those struck at the branch mint in Carson City, Nevada are popular with collectors because of their ties to the days of the old west. Collectors can find quite a few nice examples of Morgan and the Peace dollars that were struck from 1921 through 1938 because many did not circulate. These coins were held as backing to silver certificates in circulation and did not get released to the general public until the GSA Hoard sales that begin in the 1960s.

Such a colorful history also has a downside that is used as fodder against the dollar. After ending the production of the Peace dollar in 1938, no dollars were struck until 1964 when the U.S. Mint struck 316,076 1964-D Peace dollars in May 1965. The coins were never put into circulation and the entire population of 1964-D Peace dollar were allegedly destroyed. There have been reports that some Peace dollars were struck using base metals (copper-nickel clad) as experimental pieces in 1970 in anticipation of the approval of the Eisenhower dollar. The same reports also presume these coins have been destroyed.

The Eisenhower dollar was not well received because of its size. The 38mm coin was seen as too big for modern commerce and with the exception of dollars struck with the special bicentennial reverse in 1975 and 1976, most coins did not circulate. 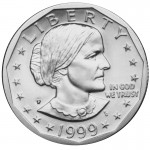 The Susan B. Anthony dollar coin was introduced in 1979 with much fanfare for being the first coin to honor a woman. The coin was a failure because it was confused with a quarter

Since the introduction of the Sacagawea dollar in 2000, the dollar coin’s size has remained the same but with the addition of manganese has a golden color to be visually different from other coins. For the visually impaired, the reeding was removed from the edges. Today, the Presidential $1 coins and the Native American $1 Coins have edge lettering that keeps it tactically different from the quarter dollar. However, people continue to bring up the Susan B. Anthony dollar as a reason not to use dollar coins.

Historically, dollar coins has been more popular in the western regions of the United States where the east prefers paper. Financial centers and big city government prefers paper for its alleged ease of handling. When circulated side-by-side, the public tends to choose paper over coin.

When we look around the world for examples of how to handle this situation, we find that the United States is the only country where the unit currency is available in both paper and coin. Other countries did not give people a choice. Rather, their governments made a decision based on overall economic benefits of using a coin with a predicted 30-year lifespan over paper currency that can last 18-24 months in circulation. Instead of the argument being of practical economics where every other country and the European Union have put on their proverbial long pants and made a decision that is in their best economic interest, factions in the United States comes up with mind boggling arguments of alleging that taking the paper dollar away is akin to taking away our freedom. 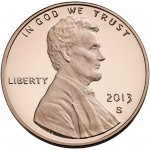 Then why is that not an argument that can be used to figure out what the do about the one cent coin? Are we not giving up the same freedoms by forcing those who pay for good and services using cash to sacrifice their ability to pay what is due and not over pay?

The United States has a history of using its currency to boost the economic status of its citizens, aside from the various silver laws and the laws that eventually took the United States off the gold and silver standards, the creation of the half-cent was made because of the economic status of its citizens. Following Alexander Hamilton’s Treasury Secretrary’s report to congress “On the Establishment of a Mint,” Secretary of State Thomas Jefferson had another idea. Jefferson thought it would be better to tie subsidiary coins tied to the actual usage of the 8 reales coin. At the time, rather than worry about subsidiary coinage, people would cut the coin into pieces. A milled dollar cut in half was a half-dollar. That half-dollar cut in half was a quarter-dollar and the quarter-dollar cut in half was called a bit.

The bit was the basic unit of commerce since prices were based on the bit. Of course this was not a perfect solution. It was difficult to cut the quarter-dollars in half with great consistency which created problems when the bit was too small, called a short bit. Sometimes, short bits were supplemented with English pennies that were allowed to circulate in the colonies.

As an aside, this is where the nickname “two bits” for a quarter came from.

Jefferson felt that in order to convert the people from bit economy to a decimal economy, the half-cent was necessary to have 12½ cents be used instead of a bit without causing problems during conversion from allowing foreign currency to circulate as legal tender until the new Mint can produce enough coinage for commerce.

The half-cent would come into focus in the 1850s when the cost to produce the United State’s copper coins was nearly double their face value. In 1856, the Mint produced the first of the small cents, the Flying Eagle small cent, and produced 700 samples to convince congress to change to the small cent. As part of the discussion was the elimination of foreign currency from circulation making the U.S. Mint the sole supplier of coins.

There is no record of outcry from the public on the elimination of the half-cent. Its elimination came four years after the Coinage Act of 1853 that created the one-dollar and double eagle gold coins in response to the discovery of gold in North Carolina, Georgia, and California. The gold rush caused a prosperity and inflation that not only made the half-cent irrelevant but not something on the public’s mint. In that light, the Mint and congress felt that it just outlived its usefulness and would not be necessary with the elimination of foreign currency from circulation.

More controversy was generated in 1857 over the demonetizing foreign coins in the United States than the elimination of the half-cent. While the half-cent continued to circulate, it was estimated that one-third of the coins being circulated were foreign, primarily reales from Mexico. Redemption programs did not go smoothly, but in the end foreign coins were taken out of the market and the American people adapted and it could be said we prospered as a nation.

Like the 1850s, the last seven years have found that the cost of the copper used to make the one-cent coin has increased to more than the coin’s value. Combined with the labor and manufacturing costs, it costs the U.S. Mint between 1.6 and 1.8 cents for each copper-coated zinc cent struck. Although people argue that the cent is not needed and is barely useful, the U.S. Mint reports that 65-percent of its production are for one-cent coins that are ordered by the Federal Reserve to be circulated in commerce.

Eliminating the cent has caused controversy from those concerned with the economic welfare of the less fortunate. Many are using the same arguments that Jefferson made in 1791 to create the half-cent in order to keep the one-cent coin in circulation while others point to what other countries are doing. Canada is currently the country with the largest economy to eliminate its lowest denomination coin. Proponents of eliminating the cent point to Canada’s rocky success (withdrawal of the cent had been delayed twice) as an example of how the United States can handle the situation. 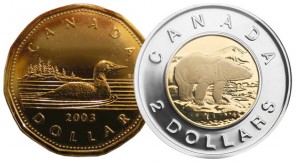 Canadian 1-dollar and 2-dollar coins. The 1-dollar coin is called a Loonie because its reverse depicts a common loon. “Toonie” is a play on the Loonie nickname.

Canada also does not circulate paper currency smaller than their 5-dollar banknote. Rather than paper (or polymer as they are converting away from rag-bond paper), Canada circulates a one-dollar (Loonie) and two-dollar (Toonie) that is regularly used in commerce. The Bank of Canada is also considering eliminating their 5-dollar note in favor of a 5-dollar coin that would be produced by the Royal Canadian Mint for circulation.

This debate will continue until someone decides to act like an adult and make a definitive policy decision—especially when the Fed publishes a “working paper” that cherry picks facts to support a specific viewpoint.