Cash is being called spooky!

Cash seems to be the new 4-lettered word. 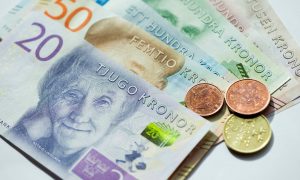 In February, former Treasury Secretary Lawrence Summers authored an opinion article that appeared in The Washington Post calling for the end of high-denomination banknotes. Summers cites a paper that claims to make a compelling case to stop issuing high denomination notes and possibly withdraw them from circulation because of its use in crime and corruption because large denominations are easier to carry. The paper claims that criminals have nicknamed the €500 note the “Bin Laden.”

Last May, the European Central Bank announced will stop printing the €500 banknote by the end of 2018 when the €100 and €200 banknotes of the Europa series are planned to be introduced. Although the announcement did not quote the Summers article, the announcement had addressed some of the issues he addressed.

In June, Sweden became the first nation to announce a formal policy to become a cashless society within five years. According to reports, Riksbank, the Swedish central bank, claims that just under 2-percent of all transactions are made by cash. They expect that number to drop to one-half of one-percent by 2020. Most shops report that 20-percent of sales are made using cash.

Sweden may be an outlier. Globally about 75-percent of all sales are made using cash.

In the United States, it is being reported that some higher-end retailers have stopped taking cash.

Retailers have been looking to the convenience industries as an example of the future. There are parking lots that no longer take coins in their parking meters. Pay stations now only accept credit cards. Some toll roads now require a special transponder to be mounted in your car because there are no booths to collect tolls. Those transponders must be linked to a credit card. Airlines no longer take cash when you buy beverages or snacks on the plane because handling the change is too difficult.

New payment options have entered the market. Smartphone-based Apple Pay, Samsung Pay, and MasterCard Master Pass have worked to make it easier to separate you from your money by allowing you to wave your phone at the reader and pay. For most retailers, there is little they have to do in order to accept these payment methods as long as they are accepting chip-based transactions. Since the transaction cost to the retailer does not change, it is an incentive for them to accept these types of electronic payments.

Although electronic payment options make up 13-percent of all cashless transactions you have to remember that this market barely existed a few years ago.

Even as banks and large retailers push to increase the number cashless transaction, there are problems that society faces when moving to a cashless retail system.

The biggest problem is one of scale. The United States makes more money, spends more money, trades more money, and has more economic impact than any other country in the world. It is the world’s single largest economy with a strong capitalistic culture where most of the commerce is done with small businesses. Amongst all business, 55-percent of retail merchants are cash-only enterprises. They are too small to consider paying the 3-to-5 percent fees for using a credit card, known as the “swipe fee.” Of those that do take credit cards, at least 36-percent require a minimum purchase.

Once you get past the problem of scale, then there are the issues of the poor who do not have bank accounts. Aside from not having the economic power to work with the banks, there are some communities that are culturally opposed to the banking system. Even if they can afford to have a bank account, many choose not to open one. The near failure of large financial institutions in 2008 did not help in the trust factor.

Of course, the one cultural issue that cannot be ignored is privacy. Cash transactions are private. Only the buyer and seller knows the details of the transaction (unless the buyer volunteers their loyalty or rewards account information). With the problems of hacking around the world, how do you know that your credit card transaction are safe? Should we ask the victims of the computer hacks on Target and Home Depot?

Aside from privacy, credit cards can be costly to the customer. High-interest rates, debilitating debt, and collection issues see the use of consumer credit dropping when there is an economic downturn. During the Great Recession that began in 2008, spending went down and, when the economy began to improve, savings went up. When wages began to rise in 2010, more money was being spent paying down debt than adding to the economy. Rather than stimulating the economy, this creates a stagnant effect since the economy thrives more on the selling of goods and not by the managing of cash.

It seems that every six months there is yet another “Chicken Little” story that either we are or should stop using cash. But when society seems to be set in using cash even when there is anecdotal evidence that makes it appear that we are on the brink of a cashless society, they become quiet as if they ended up in Foxey Loxey’s den!

Reports of cash’s eventual demise appear to be as amusing as it is greatly exaggerated. For numismatists, this means that our hobby will continue to grow with new, fresh material for years to come. Happy collecting!

image courtesy of The Guardian